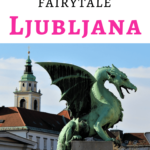 The capital of Slovenia, Ljubljana, is the perfect European city break for a long weekend. The old town is adorable, there’s an alternative area to give it some edge, there’s a real bucket list day trip on your doorstep and the city symbol is a dragon – what’s not to love?

Here are seven reasons to take a city break to Ljubljana.

1. Ljubljana’s old town is straight out of a fairytale

Ljubljana is just impossibly gorgeous. Pastel-coloured buildings, beautiful bridges, quaint squares; the old town in Ljubljana is small but magical. The scene of the Tromostovje triple bridge with Prešernov trg square and the pink Marijinega church in the background is one of the most beautiful in Europe. It’s so perfect, it just doesn’t seem real.

As if the old town wasn’t enough, Ljubljana is crowned with a castle that looks like something a child might draw. Up on the hill (these days you can get there using the funicular train) is a medieval fortress complete with turrets and ramparts – all it’s missing is a maiden to be rescued. The castle was closed for a film festival when I visited but it’s open for visits most of the year.

2. There are dragons everywhere

The Ljubljana dragon appears all over the city, from postcards, to car registration plates, to the four huge dragons and sixteen smaller dragons who guard the appropriately-named Dragon Bridge.

Ljubljana’s obsession with dragons officially dates back to the Baroque era, when a dragon became the symbol of the city, but the legend goes back much further. Ancient Greek hero Jason (the one with the Argonauts) fled from the Black Sea after stealing the Golden Fleece. They eventually ended up at the source of the Ljubljanica river, where Jason battled and killed a ferocious dragon. Jason is now hailed as the first citizen of Ljubljana.

All the major attractions in Ljubljana are within a really small area, so everything’s just a short stroll away. With the exception of getting to Lake Bled (more on that later), you probably won’t need to use public transport at all during your stay in Ljubljana.

If it’s all got too cutesy for you, take a walk north east of the old town to Metelkova. Metelkova is an alternative community and series of cultural spaces set in an old army barracks complex, reminiscent of Christiania in Copenhagen and Užupis in Vilnius.

If you visit Metelkova during the day you might think it’s still abandoned, but at night it comes to life. Metelkova hosts over 1500 events each year, from concerts and workshops to club nights and theatre.

Even if you haven’t considered visiting Ljubljana, you might have seen pictures of Lake Bled. One of the most beautiful spots in Europe, the combination of turquoise water, wooded shores, an island with a fairytale church in the centre, and all watched over by a medieval castle is bewitching.

Getting to Lake Bled from Ljubljana is really easy. Regular buses leave from outside the main railway station and take around one hour 20 minutes. They can get really busy at peak times though, so make sure you get to the bus station well before the bus leaves.

6. You can visit a mini Empire State Building

In such a picturesque city, visiting a skyscraper might not be high on your list. But you shouldn’t miss visiting Slovenia’s first skyscraper when you visit Ljubljana. Nebotičnik was built in the early 1930s (construction started in 1931, the same year as the Empire State Building was completed).

Nebotičnik has only 13 floors, so it’s very small by today’s standards, but when it was built it was the tallest building in Yugoslavia, the 9th tallest skyscraper in Europe and the tallest residential building in Europe. At the top there’s a lovely bar with observation deck; from here you can get gorgeous views over the old town, the river and Ljubljana Castle.

7. There’s plenty of things to do…

…but not so much that you won’t have time to relax. In some cities there’s so much to do that you can end up racing from sight to sight, museum to gallery, until it’s time to rush back to the airport. Part of the charm of Ljubljana is that it isn’t like that. There’s enough to do that you’ll never be at risk of getting bored, but it’s also a wonderful place just to chill out.

Wander through the old town, relax at a riverside café, hang out with the stunning view at Nebotičnik – all must-dos in Ljubljana. Even a trip to Lake Bled is utterly idyllic and relaxing. Romantic, restorative and dreamy; that’s Ljubljana.

Have you been to Ljubljana?

15 thoughts on “7 reasons to visit Ljubljana”

Top things to do in Brussels in two days