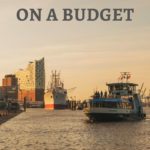 Hamburg’s waterways were key to its success as a trading city, and Hamburg is still Europe’s third-busiest port. No visit to Hamburg would be complete without experiencing the city from the water, and while there are lots of fantastic Hamburg harbour tours along the Elbe river, through the Speicherstadt canals and up to the Alster lake, if you’re on a budget they might be too costly. Luckily there’s a great, super-cheap alternative to the luxury harbour tours, and that’s using the Hamburg harbour ferries.

In this post you can read about the two best Hamburg ferry routes for visitors to Hamburg, what you’ll see on each route and the best ferry stops for sightseeing in Hamburg.

This post contains affiliate links. All this means is that if you choose to buy something after clicking on one of the links below, I’ll be paid a small amount that goes towards the running of this site. There’s no extra cost to you. I was gifted a Hamburg Card for my visit to Hamburg, but all the opinions below are my own. Thanks for reading!

The Elbsphilharmonie ferry stop on the Elbe river is one of the best starting points for exploring Hamburg by ferry. It’s only a few minutes’ walk from the Elbsphilharmonie concert hall and the other attractions in the Speicherstadt, so it’s very convenient for most visitors to Hamburg.

From Elbsphilharmonie, take the number 72 ferry towards Landungsbrücken ferry terminal (the direction towards the concert hall). The journey to Landungsbrücken takes less than 15 minutes but is extremely scenic.

To the right of the boat you’ll get to see the Elbsphilharmonie at its most magnificent angles, as well as the entrances to the Speicherstadt canals, the Cap San Diego museum ship and the Rickmer Rickmers historic 19th-century sailing ship. Tto the left you’ll see some of Hamburg’s many container ship docks.

St. Pauli Landungsbrücken (often just called Landungsbrücken) is the hub of Hamburg’s ferry network. It’s a large complex; the floating jetties at Landungsbrücken are a total of 700 metres long, and there’s a large and very impressive terminal building topped with green domes which dates back to 1907. Almost all the public ferry routes pass through Landungsbrücken, as well as many of the tourist boat tours, so you’re almost guaranteed to visit the ferry terminal at some point during your visit to Hamburg.

If you have some time to kill between ferries, you can have a meal at one of the restaurants either on the jetties or inside the terminal building. There are also lots of snack stalls serving hot dogs and Fischbrötchen, Hamburg’s iconic fish roll sandwich. If you feel like your trip on the Elbe wouldn’t be complete without a sea captain’s cap or sailor hat, there are several gift shops selling maritime-themed Hamburg souvenirs.

Landungsbrücken is convenient for many of the best things to do in Hamburg, including the Olde Elbe Tunnel, St Pauli Beach and the Reeperbahn area. There’s an S-Bahn and U-Bahn station (also called Landungsbrücken) just across the street, for travelling to areas of Hamburg away from the river.

The number 62 ferry is one of the most popular ferry routes in Hamburg as it takes in some of Hamburg’s key sites along the Elbe for the price of a public transport ticket. It can get busy with visitors to Hamburg, and it’s particularly packed on sunny Bank Holidays, but for the ticket price it’s an absolutely unbeatable Hamburg attraction.

Like most of Hamburg’s ferries, the number 62 has an open-air deck which is fantastic for sightseeing, and some of the larger ships on the route have an onboard cafe.

On leaving Landungsbrücken, the first stop for the number 62 ferry is Altona (Fischmarkt). This stop is convenient for visiting the Sunday morning fish market and visiting the U-Boat museum.

The next stop after Altona is Dockland (Fischereihafen). This stop is next to Hamburg’s cruise ship terminal and is well-placed for exploring the prettiest parts of the Altona district, including the Altonaer Balkon park, which has great views over the river. You also can’t miss the office block next to the ferry stop, which is shaped like an ocean-going ship and has a public viewing gallery over the Elbe.

Soon after leaving Dockland you’ll come to Neumühlen/Övelgönne, where you can see a collection of historic small ships. This area also has lots of picturesque old houses and one of Hamburg’s best beaches. The beach-side cafes are a very pleasant place to spend an afternoon watching the enormous container ships sailing along the Elbe.

After Neumühlen/Övelgönne the 62 ferry sets off across the width of the Elbe towards its final stop at Finkenwerder. On the way, you’ll see Der Alte Schwede, an enormous glacier boulder which was removed from the Elbe and now sits on a beach next to the river. On the other side of the river are some more of Hamburg’s container ports, and if you’re lucky, your ferry will overtake some of the giant ships headed into port, laden with their mysterious, brightly-coloured containers. On the way, you’ll stop at Bubendey-Ufer, which is the best ferry stop for visiting the pretty Seemannshöft pilot station.

Once you round the corner past the pilot station, you’re nearly at Finkenwerder, the final stop for the number 62 ferry. There isn’t an awful lot to do in Finkenwerder apart from the Airbus factory tour, but if you do get off here you can walk through the local park, back down to the riverside and watch the ships coming and going. Otherwise, stay on board for the return journey back to Landungsbrücken.

How to buy ferry tickets in Hamburg

The ferries in Hamburg are operated by HADAG. Ferry tickets for HADAG services, including the number 62 and 72 ferries, are included in the single, daily and weekly tickets on sale at HVV ticket vending machines. HVV tickets are also valid on buses, U-Bahn trains and S-Bahn trains.

If you’re visiting Hamburg as a tourist and planning to visit the many attractions in the city, then you should definitely consider buying a Hamburg Card. The Hamburg Card includes unlimited public transport on buses, trains and harbour ferries, up to 50% discount at over 150 tourist sights, and discounts at restaurants and cafes all over the city.

Do the Hamburg ferries go through the Speicherstadt canals?

Unfortunately not – the closest the ferries go to the canals of the Speicherstadt area is the route of the number 72 ferry between Landungsbrücken and Elbsphilharmonie. If you want to see the Speicherstadt by boat, then it’s best to book a dedicated tour aimed at visitors to Hamburg.

Are there public ferries on the Alster lake?

Do Hamburg ferries have guides or audio guides?

These are public ferries, so they don’t have guides. If you’re looking for a boat tour of the Elbe with a guide, then there are plenty to choose from, including 1-hour tours, boat tours with a guided tour of the Elbsphilharmonie and evening cruises when the harbour is lit up.

Pin it for later!

Pin and homepage image with thanks to Julia Solonina on Unsplash

Things to do in Hamburg: 21 of the best Hamburg attractions