The gorgeous Spanish city of Seville is full of must-see sights. Here are the top six unmissable places to see in Seville when you visit the city.

No trip to Seville is complete without a visit to the Real Alcázar de Seville. This complex of lush gardens and medieval palaces (some parts of which are still in use by Spain’s Royal family) is incredibly beautiful. Take a tour or audio guide to get the full, fascinating, story. Alternatively, simply wander through the fragrant orange groves, get lost in the maze and try to spot the locations used in Game of Thrones. Make sure you say hello to the peacocks who hang out near the cafe.

As a must-see in Seville, the Real Alcázar gets busy, with long queues to get in at peak times. To make the most of your visit, book tickets in advance on the website.

Seville’s latest attraction opened in 2011 and claims to be the world’s largest wooden structure. Nicknamed “las setas” (the mushrooms), the interlocking canopy made from birch wood shades La Encarnación square from the fierce summer sun. The Metropol Parasol was created by German architect Jürgen Mayer, whose idea won an international competition to find a design for the site.

Take the walkway which leads underneath the square to see the Roman ruins which halted construction on the car park originally planned for the site, and pay just 3 euros to take a lift to the rooftop walkways. Undulating and otherworldly, the paths around the roof of las setas offer visitors one of the best views in town.

To the south of the city centre, stretching along the banks of the Guadalquivir River, you’ll find the Parque de Maria Luisa. This large park would be worth a visit in its own right but its main draw for visitors is the stunning Plaza de España.

The gorgeous crescent-shaped Plaza with its ornate tilework, bridges and shady alcoves, each representing a Spanish city or region, was built for the Ibero-American Exposition of 1929. Rent a rowing boat and relax on the water as the park’s green parrots fly overhead.

We walked back into the old town from the Plaza de España along the river, joining the broad riverfront walking and cycling path at the Torre del Oro (Tower of Gold).

The Torre is a 12-sided former military watchtower – unfortunately it isn’t actually made of gold but was named for the golden glow of its warm-coloured walls’ reflection in the river. A few streets north you’ll find Seville’s bullring.

In the very heart of Seville you’ll find its cathedral. This enormous building is the biggest Gothic cathedral in the world and the world’s third biggest church. While you’re bound to be stunned by the beauty and size of the building, the best way to discover the history and secrets of Seville Cathedral is to take a rooftop guided tour.

Over 90 minutes, you’ll slip through hidden doors, climb narrow staircases and see how the cathedral was built and rebuilt over centuries to become what it is today. It’s a fascinating story; the cathedral was originally built as a mosque in the 12th century before being converted into a Christian church overnight when Ferdinand III conquered the city. The former mosque was used as a church for another 150 years until city leaders decided to rebuild it in a manner that reflected Seville’s new-found wealth, saying “Let us build a church so beautiful and so grand that those who see it finished will think we are mad”.

Whether you take the rooftop tour or not, when you visit Seville Cathedral don’t miss Christopher Columbus’s tomb and the gorgeous courtyard planted with rows of orange trees.

We were lucky that our AirBnB had a great view across the rooftops towards La Giralda, the cathedral’s bell tower and one of the most important symbols of Seville. The tower was originally built as the minaret for the mosque, having bells and the weathervane added for its new life as a cathedral bell tower.

Your entry ticket to the cathedral allows you to climb the tower to see the huge bells and get a stunning view of the city across the cathedral roof to the Real Alcazar and beyond.

Once inside La Giralda you won’t find steps as you might expect but a series of 35 ramps; Seville’s Moorish Muslim ruler ordered the minaret to be built in this way so the muezzin could ride a horse to the top to recite the call to prayer.

Have you been to Seville? What are your must-see places to visit in the city? 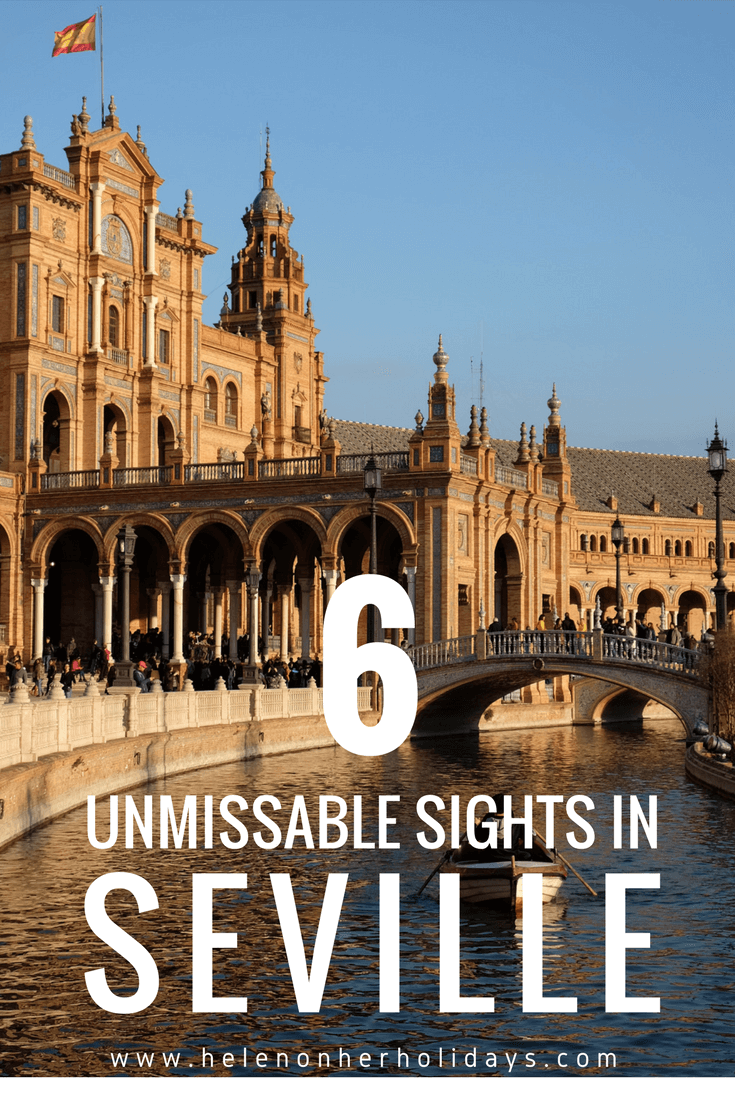 13 thoughts on “Six unmissable places to see in Seville”