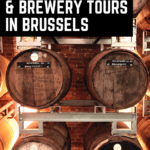 This post contains affiliate links: if you buy something then I’ll receive a small fee which helps support the running costs of this site. There’s no extra cost to you. Visit Brussels gifted me a Brussels Card for my visit to Brussels but all opinions are my own.

Along with waffles and chocolate, one of Belgium’s most famous exports is beer. Luckily for beer-loving visitors to Brussels, there are plenty of opportunities to enjoy beer tasting, brewery tours and other fun beer-related activities.

A brief history of beer in Belgium

Beer has been brewed in Belgium since around the 12th century and has a close relationship with the church. In the early days, beer was brewed by monks to make money, and drunk by almost everyone as a cleaner alternative to the dirty drinking water.

In the late 18th century, Trappist monks fleeing the French Revolution arrived in Belgium; the first Trappist brewery was set up near Antwerp in 1836, and there are still many Trappist beers around today. For a beer to be labelled Trappist, the brewery must be in a monastery, the monks must play a role in brewing the beer, and the profits must go towards maintaining the monastery or charitable works.

In modern Belgium, you can now buy Belgian beer from a huge variety of breweries; the old Trappist breweries, family businesses that go back generations, craft breweries that brew beer in the traditional style, and a new crop of modern breweries that are shaking up the beer scene in Belgium.

The styles of beer brewed in Brussels

There are a wide range of styles of beer brewed in Brussels, but most use one of four types of fermentation:

How strong is Belgian beer?

If you’re used to beer from the UK or USA, you might find the beer you try in Brussels… surprising. In contrast to a typical strength of 3-5% for an English beer and a little more for beers brewed in the USA, Belgian beers start at 5% and go rapidly up from there.

The ubiquitous Delirium clocks in at 8.5%, while one of the strongest beers ever brewed came from Belgium – temporarily earning its place in the record books at an extremely robust 39%.

The moral of the story; whatever beer you’re drinking in Brussels, approach with caution.

Many visitors to Brussels want to visit a brewery and do a brewery tour. There are two main options for visitors; one very traditional and historic, the other which shows the modern side of beer in Brussels.

It was founded in 2013 by two beer-lovers, with an emphasis on crowdfunding and co-creation. Brussels Beer Project’s first publicly available beer, Delta IPA, was one of four prototype brews. The four beers were put to a vote by 850 early backers to see which one would go into production. The team at Brussels Beer Project still follow this process; try to create a beer a week, then the most successful creations are put to an annual public tasting to decide which one joins the ranks of their “All-Stars”. If you visit the brewery, you’ll be able to try out the All-Stars, alongside their latest creations with catchy names like #EXP0062.

We visited Brussels Beer Project for one of their flash tours. We were greeted with a glass of Delta IPA (with tropical notes, it’s seriously delicious) while our host talked us through the story of how the brewery was formed.

We were then served a flight of four small taster glasses with very different beers from the brewery:

The flash tour also included a quick look at the brewery itself, which is right there in the bar. After the end of the tour, we bought another glass of the Delta IPA and sat in the bar watching the brewers doing their work. The walls of the bar are filled with barrels of Brussels Beer Projects’ latest experimental creations.

The Cantillon Brewery is the place to come if you want to take a tour of a traditional Belgian brewery. Cantillon is a family-owned brewery, founded in 1900, which brews beer exclusively in the traditional lambic style, using spontaneous fermentation. Visitors take a self-guided tour of the brewery, followed by the chance to taste two Cantillon beers.

More beer-related things to do in Brussels

If you’re interested in the history of Belgian beer, don’t miss this museum which is conveniently located in the Grand-Place. You’ll be able to look at a recreation of an 18th-century brewery, and see how technology is helping brewers today. Entry to the Belgian Brewers Museum is included with the Brussels Card.

Schaerbeek Beer Museum is a small museum with a large collection of beer bottles (over 2000), advertising materials, interesting old pub and beer signs, plus an exhibition on how Belgian beer is made. At the end of your visit you’ll be able to taste a Schaerbeek beer.

Visit a pub with a record-breaking range of beers

Delirium Café isn’t just a good pub, it’s a record-breaking pub. In 2004, they claimed a place in the Guinness Book of Records by having the most beers available at any pub – 2,004 different beers. These days there are still over 2,000 beers to try, and knowledgeable staff who can help you choose from the bewildering range.

Brew your own beer at a brewing workshop

Malt & Mout run monthly brewing workshops, where beer fans can create their own brew, from start to finish. If you want to get hands-on with the hops, and do some taste-testing as well, then book a place; the workshops usually run on Saturdays and last a full day.

The BXL Beer Fest calls itself the Crossroads of Beers and Friends, and aims to bring together the best beers from Belgium and other countries around the world. 60 independent craft breweries bring over 350 different beers to the event. The organisers try to create an event with a relaxed atmosphere, with food that complements the wide variety of beers on offer.

Taking place in the imposing Grand Place, Belgian Beer Weekend is organised by the Belgian Brewers – one of the oldest professional organisations in the world. Alongside the beer tasting, there’s plenty of historic pomp and ceremony, including a parade where brewers in traditional costumes carry a cask of beer through the streets.

Places to stay in Brussels for beer-lovers

If you prefer as short a distance as possible between your last beer and your bed, try the photography-themed Zoom Hotel which has over 50 Belgian beers available at the hotel bar.

The Meininger Hotel is set in an imposing, brick-built, former brewery, next door to the MIMA art gallery. The hotel’s kept an industrial-chic style, and there’s an on-site bar.

Thon Hotels have taken their commitment to beer one step further for their guests and created their own beer. You can try Thonner’ke beer at any of the Thon hotels; the Thon Hotel Brussels City Centre is convenient for the Grand Place and legendary Brussels pub À La Mort Subite.

A votre santé! Have you tried Belgian beer?

Read more about taking a trip to Brussels:

Things to do in Brussels in two days

Top things to do in Brussels in two days