Bucharest: 11 reasons why the Romanian capital should be your next city break

Bucharest doesn’t feature on must-visit lists the way long-time city break favourites like Paris or Rome do. So why choose it for your next weekend break?

Tourists are only just starting to discover Bucharest, so there’s a good chance you’ll have the sights to yourself. In two days in the city we only saw two tour groups. That’s not to say it isn’t geared up for tourists – it’s easy to get around, most people we met spoke at least some English and everywhere we went on our weekend trip we felt totally safe.

2. Bucharest is surprisingly beautiful, and getting better by the day

Having ended the 19th century with the nickname “Paris of the East”, the 20th century was not kind to Bucharest. It was bombed by both the Allies and the Nazis during World War II, much of the historic centre was demolished by Ceaușescu, and an earthquake in 1977 caused further damage to many of the old buildings that remained.

There are still a lot of derelict buildings (some of which are being renovated, especially in the historic centre), and a lot of concrete, but there are wonderful details everywhere, the grand old buildings like the Athenaeum have been restored and look amazing, and even the 1970s and 1980s architecture of Ceaușescu’s era has quirky postmodern details.

3. There are loads of sights in an easily walkable area

This is pretty geeky, but when I go on a city break, I love mapping out all the places I want to see using Google Maps. I use it to choose where we stay (ideally in the middle of everything) and what we’ll do each day.

When I started mapping out the sights in Bucharest it looked like it was quite spread out, but that really wasn’t the case. We stayed on the southern edge of the historic centre and in one day saw almost all the sights we wanted to hit – without using public transport. Bucharest’s answer to Paris’s Arch de Triomphe is a little way out of the city centre but we saw it on our way to and from the airport.

4. Bucharest’s historic centre is on the up

Bucharest reminded me a lot of Porto in that in the old town (locals call it the historic centre), you’ll see a beautifully restored building, and then the building next door will be completely derelict.

Until a very few years ago, the historic centre was effectively a no-go zone, with little of interest to most visitors. These days every street in the district is full of life, with coffee shops, restaurants, antique dealers and bookshops just made for lingering in.

5. It’s got the world’s heaviest building

6. There’s something surprising around every corner

When you’re in Bucharest, take detours down side streets and pop your head through open doors. You never know what you’ll find. We found a gorgeous street of umbrellas inside an unpromising arcade, not one but two incredible monasteries and a flea market which knocked the socks off anything I’ve seen in the UK.

Oh the bookshops! If you’ve looked up Bucharest on Instagram, you’ll definitely have seen the stunning Carturesti Carusel. This beautiful bookshop is an insta-favourite, and for good reason – the white-and-wood interior, spiral staircases and graceful pillars are beyond photogenic.

It’s just one example of the revival of Bucharest’s old town; confiscated by the government from the original owners during Communist times, it was turned into a department store. After the fall of Communism, the building stayed closed for nearly 25 years before reopening as this magical 6-floor emporium.

Carturesti Carusel isn’t the only bookshop in town though; we saw small, local bookshops everywhere. Across town, near the Athenaeum, you’ll find another branch of the Carturesti chain, Carturesti Verona.

While a little less polished than the grand Carusel, the warren-like, shabby-chic Verona is a lot of fun. Both branches sell books in English as well as Romanian.

Hotels can be a little on the pricey side, but eating, drinking and getting around are all really affordable compared to most other European cities. Two pizzas and three beers at a restaurant in the middle of the historic centre came in at under £15. A pint of local beer at a fairly touristy pub was less than £2, and our Uber from the airport to our hotel late at night (a 25-minute journey) was around £7.50.

Between the gorgeous eclair shops, the eclectic flea market and the hipster coffee shop brews, you’ll be able to find plenty of fodder for your feed.

10. It’s where Dracula used to hang out

Sort of. At the south-eastern edge of the old town you’ll find the Old Princely Court, built during the reign of Vlad III Dracula, AKA Vlad the Impaler, and the inspiration for Bram Stoker’s Dracula. Archeological excavations are being carried out on the site, and it’s temporarily closed to visitors, but you can walk around the edge and see the rather menacing statue of Vlad himself.

11. The day trips from Bucharest

We only had one full day on our weekend break to Bucharest, but if we’d had longer there are plenty of other things to do in the city and some great day trips. One of the most popular is a day trip to Bran Castle in Transylvania, otherwise known as Dracula’s castle. A trip to Bran Castle is often combined with nearby Peles Castle and the medieval city of Brasov.

Closer to the city centre, in the summer locals recommend the large King Michael I city park which is also home to the open-air National Village Museum. If the weather isn’t so good, take a trip to the Therme wellness centre. Located just north of the city, it’s the biggest thermal wellness centre of its type in Europe and boasts 9 pools, 10 saunas, 16 water slides and the largest botanical garden in Romania.

Would you take a weekend city break to Bucharest? 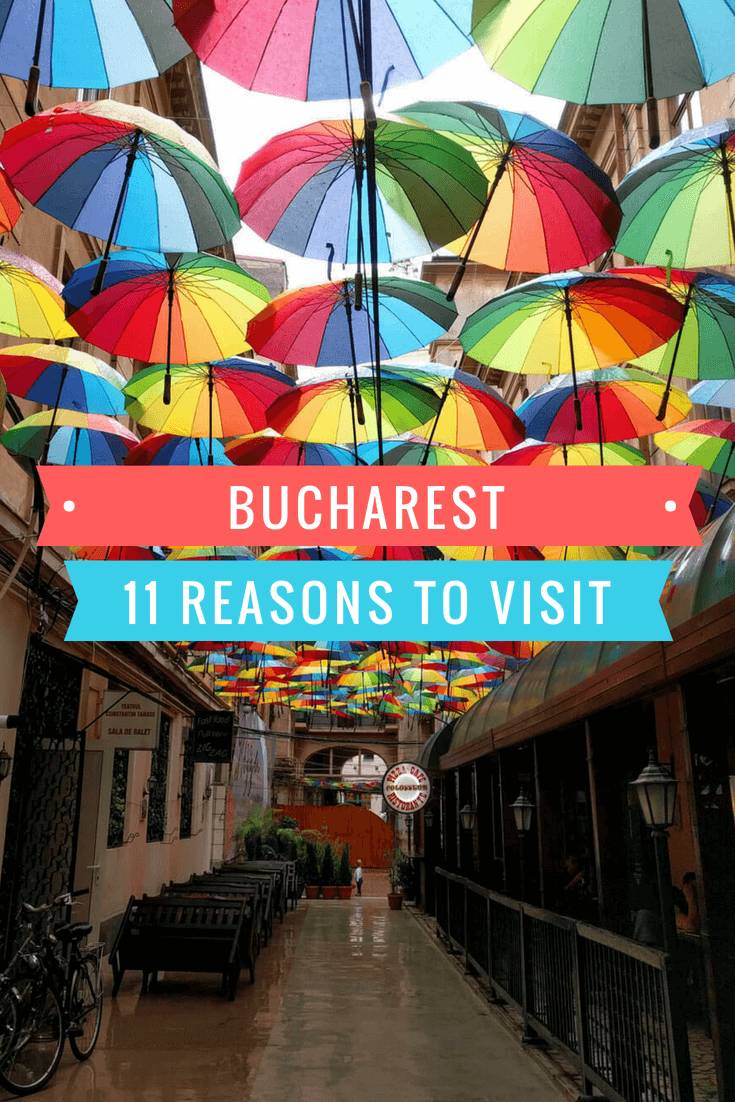 7 thoughts on “Bucharest: 11 reasons why the Romanian capital should be your next city break”