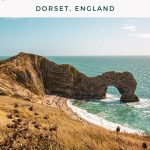 The Jurassic Coast in Dorset is a perfect place for an action-packed holiday. This part of South West England is packed with fantastic things to do, fascinating, family-friendly attractions and beautiful scenery. If you choose the Dorset Coast for a break, you’ll find there’s plenty to keep you busy on the Dorset stretch of the Jurassic Coast.

We spent a week near Swanage, and during that time we found lots of great things to do on the Jurassic Coast. In this post, I’ll tell you about my favourite places to visit on the Isle of Purbeck and Jurassic Coast in Dorset. I hope you love this beautiful part of England as much as I do!

Where is the Jurassic Coast?

The Jurassic Coast starts at Old Harry Rocks near Swanage in East Dorset and stretches for 96 miles along the south west coast of England to Orcombe Point in East Devon. It takes in part of two English counties, Dorset and Devon. The Jurassic Coast is one of the most beautiful parts of England and has been popular with visitors since Victorian times.

This part of the Dorset and Devon coasts is called the Jurassic Coast because of its amazing geology. The cliffs, stone stacks and beaches in this area date from the Triassic, Jurassic and Cretaceous periods. If you’re lucky enough to see the Jurassic Coast from the sea, you’ll be able to see the different layers of stone – 185 million years of history right there in front of you!

The other reason for the name is that the Jurassic Coast is famous for its fossils. The cliffs along the coast are full of fossils, particularly in the area of the Dorset coast around Lyme Regis. Fossil hunting on Lyme Regis or Charmouth beach is still one of the best things to do on the Dorset Coast.

Things to do on the Jurassic Coast

Here are my favourite things to do in and around the Isle of Purbeck and the Jurassic Coast.

This little village a few miles inland from Swanage is just perfection. Quaint stone buildings around a gorgeous marketplace, a picturesquely ruined castle and a steam train running through it all.

In 1943 the 225 residents of Tyneham were forced to leave their homes when the whole village was requisitioned by the Ministry of Defence. Most of the buildings are ruins but the church and schoolhouse are still standing. You can visit the abandoned village most weekends and at bank holidays.

One of the main sights of the Jurassic Coast and a true wonder of nature. Lulworth Cove is an almost-circular bay with just a small opening to the sea. There’s a car park and visitor centre in the village and it’s just a short walk to the beach.

AKA Broadchurch. The cliff at West Bay has had a starring role in the TV drama Broadchurch since 2013 and attracts droves of David Tennant-seeking fans. The cliff rears up from the sand dunes and is a truly awesome sight.

Monkey World is an ape rescue centre not far from Wareham. There are a lot of sad stories here about the residents’ previous lives and how they’ve been mistreated but the keepers obviously care deeply about the animals and their talks are both moving and informative.

AKA Dorset’s millionaires’ playground. This small peninsula and spit of land boast some of the UK’s most expensive land and property prices. It’s also got a beautiful beach. To get there from the Isle of Purbeck, take the ferry from Studland across the mouth of Poole Harbour.

Portland Bill lighthouse was built in 1906 and is still in operation today, protecting ships from the rocky shores of the Isle of Portland and the Jurassic Coast. You can go inside the lighthouse on a tour, and there’s a visitor centre in the lighthouse keeper’s cottage next door.

It unfortunately rained the entire time we were there but it looks like it would be a cool place to go on a drier day.

We’d planned to go to Chesil Beach the same day as we went to Portland Bill so we didn’t get to see it close up, but we did see it from above on our way back from Lyme Regis. Chesil Beach is an 18 mile long and 15 metre high shingle beach, connected to the mainland at each end with water in between. It’s all-natural and an amazing sight.

A gorgeous traditional seaside resort, famous for the fossils that have been found in the cliffs around the town for hundreds of years, and also for the Cobb (the wall which protects the harbour). The Cobb features in Jane Austen’s novel Persuasion and in John Fowle’s The French Lieutenant’s Woman. I was particularly interested in the story of Mary Anning, a cabinet maker’s daughter from the town who became one of the world’s leading authorities on fossils during the 1800s.

As well as being stunning and full of nature, Studland Beach on the Isle of Purbeck has an interesting history. During World War II it was chosen to be used for D-Day rehearsals because of its similarity to the beaches of Northern France. The troops performed exercises using live ammunition and a new type of tank in front of VIPs including the King, who were safely hidden in a huge concrete bunker named Fort Henry. Today you can still see pillboxes on the beach and visit Fort Henry.

Getting to Durdle Door is a bit odd because the car park is in a caravan site, so it definitely feels like you’ve taken a wrong turn. Once you’re parked up on top of the cliff, take the path down towards the edge, and there it is; a magnificent limestone arch standing proudly above its own sandy beach.

Which is the best part of the Jurassic Coast?

The Jurassic Coast area is mostly very rural and getting around can be slow. Rather than trying to take in all 96 miles of it in a week, I’d recommend picking either the eastern section, in Dorset, or the western section in Devon. Personally, I really like the Dorset coast section, as that’s where you’ll find some of the best things to do on the Jurassic Coast, like Corfe Castle, Durdle Door, West Bay and Lyme Regis.

Where to stay on the Jurassic Coast

All the attractions above are easy to visit in a week-long trip to the Dorset part of the Jurassic Coast, and I recommend staying either near Swanage or Corfe Castle on the Isle of Purbeck. or in Weymouth.

The roads around here are narrow and winding (although very scenic); wherever you stay it’s going to take you a while to get around, so it’s worth picking somewhere you’ll enjoy coming back to, and somewhere that has the facilities you’re looking for in the evenings.

Swanage is a small seaside town with a good mix of restaurants, pubs, takeaways and shops. There’s a sandy beach and a pier, and you’re right on the Purbeck Heritage Coast with lots of nice coastal and countryside walks easily accessible from the town. I stayed in a static caravan but there are lots of hotels, B&Bs and holiday rentals in the town.

Corfe Castle is a gorgeous little village just inland from Swanage on the Isle of Purbeck. Even if you don’t stay there, you should definitely visit. Corfe Castle has a couple of pubs which are open in the evening but you’ll need to go to Wareham or Swanage to pick up some groceries. The pubs have accommodation and there are a few B&Bs and guest houses, while every other house seems to be a holiday cottage – which could account for the lack of shops. There are stunning countryside walks all around Corfe Castle.

Weymouth is further west than Swanage, and sits at the entrance to both the Isle of Portland and Chesil Beach. It’s a much bigger seaside resort than Swanage, and has lots more facilities, including a train station, loads of pubs and restaurants and even a Sea Life Centre. There’s a great beach and all kinds of amusements.

Because Weymouth is a bigger place, it’s a bit harder to get into the countryside or wilder parts of the coast, but there’s plenty to keep you busy in Weymouth itself. I tend to prefer somewhere a bit quieter (more like Whitby compared to Blackpool, for example) so it’s not for me, but Weymouth is a really popular place to stay on the Jurassic Coast.

Have you visited the Jurassic Coast and the Isle of Purbeck?

18 thoughts on “11 amazing places you must see on the Jurassic Coast, Dorset”

14 reasons to visit Amsterdam beach, a hidden gem for your trip to Amsterdam