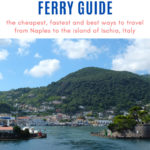 When you’re planning a trip to Ischia, one of the biggest things you’ll need to research is how to get to the island. This guide to ferries to Ischia has everything you need to know about taking the ferry from Naples to Ischia, including the cheapest way to travel, the fastest route and what I recommend as the best way to get to Ischia from Naples.

There are lots of ferry crossings from Naples to Ischia – up to 30 per day during peak times. Four ferry companies offer routes to Ischia, and their ferries and hydrofoils leave from two separate ports in Naples, so it’s useful to do a bit of research before you arrive.

This post contains affiliate links – all this means is that if you buy something after following one of the links I’ll receive a small commission that helps me run this site. There’s no extra cost to you. Thanks!

Ferry and hydrofoil companies travelling from Naples to Ischia

There are currently four ferry companies offering ferry crossings from Naples to Ischia:

Ports in Naples with ferries to Ischia

I found getting to the right port in Naples a bit confusing. They aren’t labelled well on Google Maps, and it’s difficult to find reliable information in English about which port is which, where to buy ferry tickets and how to get there on the bus. It might be obvious if you live in Naples, but for everyone else, I hope the information below is helpful.

The fastest ferries to Ischia leave from the port at Molo Beverello. This port is exclusively for hydrofoils and catamarans to Ischia and other destinations in the Bay of Naples, including Capri, Sorrento and Procida. Alilauro, SNAV and Caremar all have ticket offices at Beverello. If you’re travelling with Caremar, it’s worth noting that it’s only the hydrofoils and catamarans that depart from Molo Beverello, the Caremar car ferries leave from Porta di Massa.

Other facilities at Molo Beverello include a left-luggage office, a taxi rank, a tourist information office and a couple of cafes. The bus stop for the airport bus at Beverello is in the piazza between Molo Beverello and the Stazione Marittima cruise ship terminal.  It’s to the left-hand side of the terminal building, looking towards the sea.

If you’re travelling by ferry as opposed to hydrofoil or catamaran, then you’ll be departing from Porta di Massa. Porta di Massa is an older ferry terminal, located around 1km to the left from Beverello as you look out to sea.

We got off the airport bus too early, somewhere between Beverello and Porta di Massa, and had a devil of a job trying to find where we were meant to go. I don’t recommend doing what we did and walking as the whole area is warehouses and it’s full of lorries and roadworks for the new Naples Metro. We only found the right place because we happened to see a Medmar sign – it wasn’t the right place but got us close enough.

Medmar and Caremar ferries to Ischia leave from Porta di Massa and both companies have a ticket office inside the terminal.

The other facilities at Porta di Massa include a taxi rank, a bank with an ATM (although the bank was closed and the ATM was broken when I was there), a cafe/snack bar and tobacconist and a branch of Hertz rent a car.

There is a third port with ferries to Ischia at Pozzuoli, a city on the mainland near Naples, but it isn’t as useful for visitors as Molo Beverello or Porta di Massa. The exception will be if you have a car or motorbike that you want to bring over to Ischia (although check the regulations first, as some vehicles are not allowed onto the island and definitely check with your hire company if you’re renting a car).

If you are planning to take your car to Ischia, then taking the ferry from Pozzuoli is an easier option than driving into the centre of Naples to catch a ferry from Porta di Massa. For everyone else, stick with the ports in Naples city centre.

Ferries and hydrofoils from Naples arrive at three ports on the island of Ischia.

The most frequent ferry service to Ischia is to Ischia Porto, on the north coast of the island. All ferries, hydrofoils and catamarans arrive into the same pretty harbour in Ischia Porto. If you’re travelling from Ischia Porto to Naples or to Procida,  it’s easy to find the right departure point for your ferry.

Hydrofoils and catamaran services leave from the dedicated Terminal Aliscafi passenger landing stage in the middle of the harbour, while ferries leave from docks on the left-hand side of the port as you look towards the sea.

The Alilauro ticket office is just behind the hydrofoil landing stage. The Medmar, Caremar and SNAV ticket offices at Ischia Porto are all inside Caffe Moreno, on the left-hand side of the port, closer to where the ferries dock.

The main bus station in Ischia is right behind the port, so it’s easy to catch a bus to other places on the island. There are taxi ranks next to both the ferry dock and the hydrofoil landing stage.

Forio is on the north-western coast of Ischia and is one of the largest towns on the island. Alilauro operates a service using their fleet of hydrofoils and catamarans from Naples Beverello to Forio. Many of the Naples to Forio services stop at Ischia Porto on the way. There isn’t a real bus station in Forio but buses to other towns on the island stop on the corner of Via Cristoforo Columbo and Via Monsignor Filippo Schioppa. There’s also a taxi rank.

Naples to Ischia: ferry vs hydrofoil

Since the ports for the slow ferries and the fast hydrofoils in Naples are separate, and it isn’t convenient to walk between them, especially with luggage, you’ll need to decide quite early whether you want to get to Ischia as quickly as possible or as cheaply as possible.

The cheapest way to get from Naples to Ischia

The tradeoff for the ferry being the cheapest way to get to Ischia is how long the journey takes. The ferry takes at least 1 hour 30 minutes (most will take 1 hour 45 minutes), while the hydrofoil takes between 50 minutes and 1 hour 5 minutes.

The fastest way to get from Naples to Ischia

The very fastest ferries to Ischia are Alilauro’s services which get you from Naples to Ischia in 50 minutes – a time saving of nearly an hour over the cheaper ferries. Personal speedboat-aside, they are the most expensive way to travel at €19.40 for a single trip.

The best way to get to Ischia from Naples

This might be controversial, but I personally far preferred the ferry to the catamarans and hydrofoil. I’m a cheapskate at heart and we weren’t in any particular rush, so the slow ferry was fine for us.

During our time in Ischia we travelled on a Caremar ferry from Porta di Massa, a Medmar ferry from Ischia to Procida and another Caremar ferry back to Ischia from Procida, and they were all great. There wasn’t any queue to get on, there was plenty of space both on deck and in the inside seating areas and we experienced very little roll.

I really enjoyed the fresh air on deck and seeing the Naples coastline go by (Faro di Capo Miseno is particularly pretty), plus if your ferry stops in Procida on the way to Ischia you’ll get to see Procida’s lovely harbour too. Treat it as part of your holiday and you won’t mind the extra time.

On our final day in Ischia we had a late morning flight from Naples Airport which meant the only convenient crossing back to Naples from Ischia Porto was the Alilauro fast service. I had to queue at the ticket office, there was another big queue to get on the boat and it was honestly a bit of a crush. The boat was completely packed and David and I ended up having to sit separately with our bags on our knees.

The crossing was a bit bumpy so I didn’t fancy reading and I couldn’t see anything out of the window. Then at the other end there was a crush to get off. Yes, the ferry would have taken longer, but it was way more pleasant than the hydrofoil.

How to get from Naples airport to Ischia

Many visitors to Ischia will arrive at Naples International Airport. The airport is just outside the city centre and served by Alibus airport buses which run a visitor-friendly route between Naples Airport, Napoli Centrale railway station on Piazza Garibaldi and Porta di Napoli. Tickets cost a flat €5 per person, regardless of the destination and can be bought from the driver.

If you want to take the fastest ferry to Ischia, get off at Molo Beverello (the cruise ships at the adjoining Stazione Marittima are a good indicator that you’re there). If you want the cheapest ferry to Ischia, get off at Porta di Massa. If you’re not bothered but just want to catch the next departure, then you should check the timetable in advance to decide where to get off the bus. I liked the timetable on the Direct Ferries website and the one on traghetti-ischia.info.

It goes without saying that you should also give yourself plenty of time to get back to the airport when your trip to Ischia is over. Depending on when your flight is due to leave, you may need to book a hotel in Naples for the last night of your holiday as well.

How to buy ferry tickets from Naples to Ischia

There are ticket offices at both Molo Beverello and Porta di Massa. You can either buy tickets for travel straight away or for advance travel. Tickets are only valid for the ferry company you bought them from, so check the timetable in advance.

Do ferry crossings from Naples to Ischia sell out?

Yes they do sell out occasionally. The hydrofoils and catamarans especially can be very busy, especially in the morning and evening when people from Ischia are travelling to and from work or the shops in Naples. From my experience, the ferries are a lot less busy. If you’re travelling at a popular time you may want to book your ferry or hydrofoil tickets online in advance – it’s a bit more expensive once booking fees are added but worth it to be sure of getting on your preferred crossing. This is particularly relevant if you want to arrive in Casamiccola Terme or Forio as crossings to these two ports on Ischia are far less frequent than ferries to Ischia Porto.

Should I buy a return ticket?

You can buy return tickets but if you do choose to buy a return ticket instead of two singles you’ll be restricted to either a specific sailing or a specific ferry company. Tickets are only valid for the ferry company you’ve bought them from, so buying a return ticket cuts down your options a lot. Medmar for instance only have five sailings in each direction per day. I found it better to buy single tickets for the sailings which best fit my schedule.

I hope this post helps you with planning your journey to Ischia. If it has, why not share or pin it for later?

Visiting Haworth and the Brontë Parsonage, home of the Brontë sisters