Lake Garda ranks as one of my best holidays to Italy so far. But with over 60 villages scattered around the shore of this 32-mile-long lake, how can you make sure you see the best ones? Here’s a guide to seeing the most interesting, most picturesque villages on Lake Garda.

Lake Garda, in the north of Italy, almost on the border of Switzerland, is Italy’s largest lake. Over 60 villages, grouped into 24 communes, are scattered around its 98-mile long shoreline. It’s a gorgeous place to visit, but if you have limited time in this part of Italy, how can you make sure you visit the best bits? Here are the best villages to visit on your trip to Lake Garda.

Desenzano is the largest village on the shore of Lake Garda. Situated on the southern edge of the lake, Desenzano makes a perfect base for your Lake Garda trip. It’s one of only two villages on Lake Garda with a train station (the other is Peschiera) and boasts one of the most comprehensive ferry services of all the lakeside villages. The train service means it’s easy to get here from one of the Milan airports, and if you want to combine your Lake Garda holiday with a day trip to Verona or even Venice, it’s just an easy train ride away.

Desenzano is set in rolling countryside rather than the dramatic mountain setting of the villages at the other end of Lake Garda, but it’s still picturesque and charming. It boasts its own castle as well as some Roman ruins, and the old harbour is particularly beautiful.

The village of Sirmione is a real stunner, and definitely shouldn’t be missed if you’re visiting Lake Garda. The peninsula where Sirmione sits extends out from the southern shore of the lake like a long, slender finger, with the village towards the tip, separated from the mainland by the moat of its main attraction, the 13th-century castle. 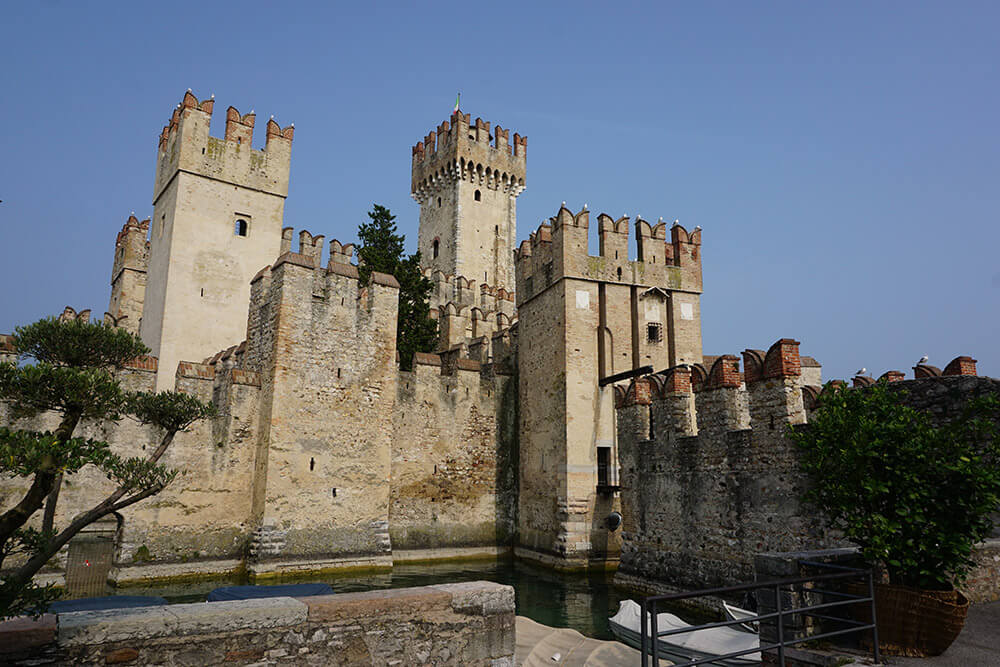 The gorgeous castle of Rocca Scaligera is one of the best-preserved in all of Italy; a ticket to go in and take in the views of Sirmione’s rooftops and the lake from the ramparts costs just 6 euro.

Sirmione also boasts an even older attraction. Right at the end of the peninsula, you’ll find the ruins of the Grotte di Catullo, a lavish Roman villa dating back to 1AD. It’s the largest domestic Roman ruin in Northern Italy; with amazing 360-degree views of the lake, this must’ve been quite the holiday home.

Interested in Roman history? See my guide to visiting Pompeii

Elegant Salò feels quite different to the other villages on Lake Garda. The main reason to visit Salò is its long promenade – rumoured to be the longest in Italy – which gives it a more open, outward-facing atmosphere when compared to fortified villages like Sirmione and villages further up the lake which nestle into their mountainous surroundings.

The inventor of the violin, Gasparo da Salò, was born here in 1542, but Salò also has a very modern history. From 1943 to 1945 it was the seat of government for Mussolini’s Nazi-backed puppet state, and many of the large villas in the town housed government departments.

It’s best to approach Limone on a Lake Garda ferry so you can appreciate how tiny the village is compared to the huge rocky mountain that towers over it. The pastel-coloured buildings around the tiny harbour hunker down on a narrow strip of the shoreline, and if Limone wasn’t already picturesque enough, every available scrap of land at the base of the mountain is covered with lemon groves.

Just north of Limone, you’ll see the road to Riva del Garda hug the edge of the lake on a series of platforms and tunnels through the mountainside. This road features in the James Bond film Quantum of Solace; during the film’s production a driver crashed a £134,000 Aston Martin into the lake. The driver was unhurt but the car was completely destroyed.

On the opposite side of the lake, almost facing Limone, you’ll find another unmissable village on Lake Garda, Malcesine. Nestled at the foot of Monte Baldo, the highest mountain around the lake, it makes the most of its stunning setting with a beautiful harbour and an impossibly-romantic castle.

A gentle walk uphill from the harbour takes you to the foot of Monte Baldo and the lower station of the Monte Baldo cable car. From here, a two-stage cable car takes you up the mountain to the ridge above Malcesine and a stunning view of the lake.

Monte Baldo and the northern part of Lake Garda is a playground if you love outdoor activities. We were lucky enough to see paragliders taking off from the top of the mountain near the cable car station. If water is more your element, you can enjoy kayaking and stand up paddle boarding from the lake shore near Malcesine. 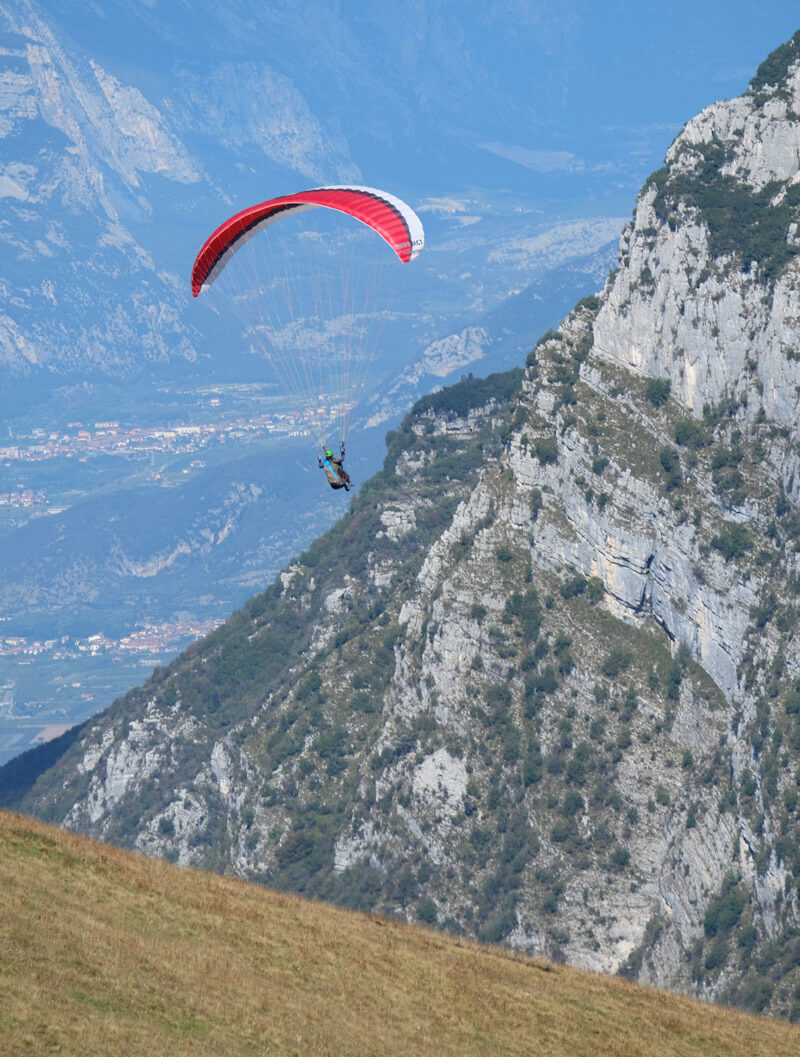 Riva del Garda, or simply Riva, is the second-largest town on Lake Garda after Desenzano, but Riva’s mountainous setting means it feels very different to its urban sister 32 miles to the south – less hurried, more peaceful, more remote. Getting here from Desenzano means an early ferry and careful planning, but it’s well worth it, because Riva has elements of all the best villages on Lake Garda.

Like Malcesine and Sirmione, Riva has its own castle, the Rocca di Riva. It’s a little more sober in its architecture than the other two, but it’s older than both, dating back to 1124. Like Salò, there’s a wonderful lakeside promenade, and Riva’s is backed with a beautiful park, perfect for enjoying views of the lake and the mountains either side.

For views that rival those from Sirmione’s castle and even Monte Baldo, visitors can climb the 13th-century Torre Apponale clock tower for a vista over Riva’s rooftops.

That’s my view of the six best villages to visit on Lake Garda – which is your favourite? 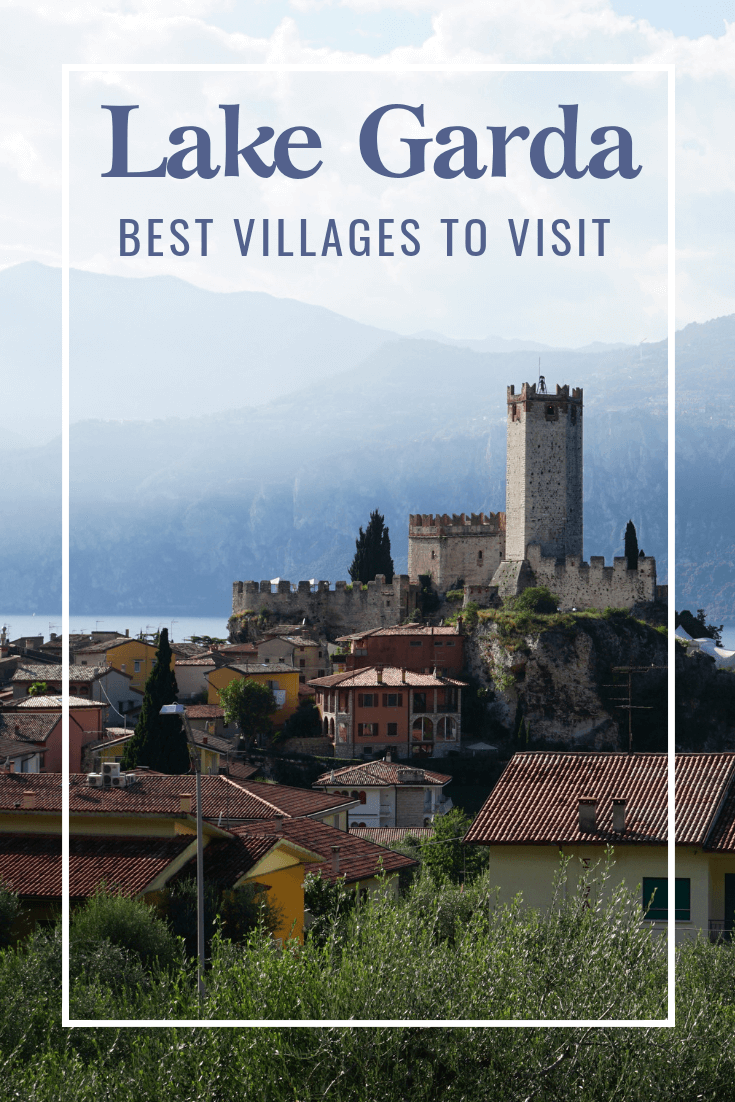 One day in Manchester: Christmas edition