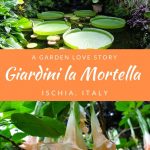 About the La Mortella gardens

The gardens were created by Susana Walton, working with legendary garden designer Russell Page. Susana was an Argentinian writer and was married to the British composer Sir William Walton.

Susana and William Walton met in September 1948 and were married by December of the same year. William Walton had composed one of his most celebrated works in Italy, and cherished the peace and quiet of the Bay of Naples. They moved to Ischia early in their marriage and bought the plot of land that would become the La Mortella gardens in 1956. At the time there was no house or garden on the land – their friend Sir Laurence Olivier described it as a “south-facing stone quarry”. It was named after the myrtle bushes which grew between the rocks.

Susana and Russell Page worked together on the gardens over the next thirty years, creating the beautiful planting, water features and landscaping that visitors to Giardini la Mortella see today. Page never asked for payment for his work on their project.

There are two main levels to the La Mortella gardens, and how you travel to the gardens will determine which part you see first. We got there from Ischia Porto by bus so we entered at the lower, subtropical level of the gardens rather than the upper, Mediterranean level as we would have done if we’d arrived by car. I think entering at the lower level is probably the nicest way round because you feel like you’re climbing up towards the sun.

There’s a ticket office at the entrance. You don’t need to book tickets in advance; tickets for the gardens cost €12 for adults while tickets for a concert visit with access to the gardens are a very reasonable €20.

A little further on you’ll come to the first water features. Two fountains are connected by a gently burbling channel of water. There are lots of benches in this area and it’s a lovely peaceful place to sit, surrounded by magnolia and hydrangeas.

As the valley rises gradually towards the house, you’ll see the central fountain. The oval pool it sits in is ringed with large volcanic rocks which Susana and Russell Page left in situ when they created Giardini la Mortella. Nearby, in one of the sunniest spots of the Valley Garden, you’ll find aloe plants, a collection of succulents and carnivorous plants like Venus fly traps.

The Valley Garden has a greenhouse, called the Victoria House after the extraordinary plants you’ll find inside. The Victoria Amazonica is the largest variety of water lily, with leaves that can grow to over six feet in diameter and flowers that can reach an astonishing 12 inches. They’re unusual in another way too; the huge flowers bloom first as white, female flowers, opening at dusk and lasting only until the following morning. A few hours later it blooms again, but this time it’s a deep reddy-pink and has changed sex to male.

The sculpture on the wall in the Victoria House is a nod to William Walton’s work. Known as the ‘Bocca’, it’s a reproduction of a mask that was part of performances of Walton’s Façade.

As you come to the end of the Valley Garden and the beginning of the Hill Garden, you’ll see Susana and William Walton’s house. You can’t tour the house but there is a small museum dedicated to William Walton’s life and work and a recital room which continues the Waltons’ wish to provide opportunities for young musicians.

Behind the house, just as you start to climb up the valley side, there’s a pretty Japanese-style tea house serving light meals (the bruschetta is delicious), drinks and cakes.

The Valley Garden at la Mortella is beautiful, peaceful and other-worldly, but the Hill Garden is arguably more interesting. This is where you’ll find both William Walton and Susana’s memorials, as well as monuments celebrating their life together and the musical venue that’s their legacy.

One of the first points of interest in the Valley Garden is William’s Rock. William Walton died in 1983 and his ashes were placed inside a rock at one of the most beautiful points of the garden, with a view across the garden that Susana created and beyond to the bay of Forio. An inscription on the rock reads:

A little further along the hillside, through a Mediterranean garden you’ll find Susana’s memorial, the Nymphaeum. Susana Walton died in March 2010, aged 83.

At the Nymphaeum a discreet water feature sits at the centre of a small, formal garden, reflecting the sky. On one side there’s a small cave with a marble Aphrodite by the sculptor Simon Verity, whose work appears throughout the garden. Susana’s ashes rest here in a secluded corner of the garden she loved.

The Temple of the Sun is a large and imposing stone building accessed by a dramatic flight of steps and with one and a half metre thick walls. Inside, the sun-dappled garden is full of symbolism and scenes from Greek myths. Words from William Walton’s operas decorate the walls.

Up above the Temple of the Sun is the Crocodile Waterfall, for me one of the prettiest parts of the garden. The pond is surrounded by tufts of blue agapanthus flowers. The crocodile is just a bronze statue but Susana Walton loved to fool people into thinking it was real. The surface of the Crocodile Waterfall pond is covered with water lilies and other aquatic plants.

This part of the garden is full of seating areas inviting you to relax and stay a while. One of them is at the shady Thai Pavilion which overlooks a peaceful pond with lotus plants and oriental planting. I was accompanied at this part of the garden by a lovely and very friendly cat who wanted nothing more than a bit of fuss and to show us the best spots for an afternoon snooze.

The centrepiece of the Hill Garden is the Greek Theatre. The theatre is set into the hillside, amphitheatre-style, and is the main venue for the concerts held at la Mortella. The concerts are staged by the William Walton Foundation and aim to provide young musicians with opportunities to perform in one of the world’s most beautiful settings.

Tickets for performances are readily available – see the section below on Concerts at Giardini la Mortella for more information.

How to get to Giardini la Mortella

The Giardini la Mortella are in the Ischia countryside between the towns of Lacco Ameno and Forio in the north west of the island.

Getting to the gardens is easy.

The CS, CD, number 1 and number 2 buses all run along the main road near the gardens. It’s only 5 minutes’ walk from the bus stop to the entrance. Coming from Ischia Porto, the bus stop is immediately after a sharp left-hand bend in the road. The gardens are signposted from the main road.

The gardens are one of the most popular things to do in Ischia so any taxi driver should know how to get there. There’s a taxi rank outside the pedestrian entrance to the gardens on Via Francesco Calise Operaio Foriano. When you’ve finished at the gardens, you’ll probably find that there’ll be taxis waiting outside to take you back to your hotel or the port.

If you’ve hired a car or scooter for your trip to Ischia then getting to the La Mortella gardens is super-simple – as long as you know where you’re going. There’s a large car park near the open-air amphitheatre in the upper level of the garden. To get there you’ll need to drive past the pedestrian entrance, past the Belvedere Di Zaro lookout point and then back on yourself. It’s far enough from the main entrance that if you’re anything like me you’ll think you’ve got lost, but just be patient and you’ll get there. These back roads are pretty narrow so be careful!

The gardens are around 2.5 km (1.5 miles) from the centre of Forio. We actually got the bus to the gardens from Ischia Porto and walked to Forio afterwards, stopping at one of the beach bars on the way for a beer and an ice cream. The main road is very busy and not great for pedestrians so if you want to walk to the gardens I’d recommend taking the beach road past Spiaggia della Chiaia and then up the (steep) hill past Chiesa di San Francesco di Paola. This route has a lovely view across Forio’s beaches and the Tyrrhenian Sea.

Visiting the gardens as a day trip from Naples

If you want to visit Giardini la Mortella as a day trip from Naples I recommend one of the fast ferries to Ischia Porto from Naples Molo Beverello to maximise your time on the island. These catamarans and hydrofoils take around an hour. From Ischia Porto you can catch a bus or take a taxi to the gardens.

You might like to combine a visit to the gardens with another of Ischia’s attractions. The fascinating Castello Aragonese in Ischia Ponte (which also has lovely gardens) is a must-see.

When is Giardini la Mortella open?

The gardens open in early April and close at the end of October. They are open on Tuesdays, Thursdays, Saturdays and Sundays from between 9am and 7pm. Please check opening times on their website before you set off.

There’s no real best time to visit Giardini la Mortella as the planting ensures there’s something to see throughout their opening season. I visited in late September at the end of a hot summer and the gardens were lush, beautiful and full of flowers.

Music is an important part of the William Walton Foundation’s mission. William Walton wanted to provide an opportunity for young musicians to perform in front of an attentive and informed audience. Today that mission is fulfilled by over 60 concerts held over the garden’s opening season.

There are three concert seasons at the La Mortella Gardens. Spring and Autumn see chamber music recitals, performed by specially selected young musicians from music schools in Rome, Naples, Philadelphia and Wales. There’s a youth orchestra season in July, again performed by some of the best young ensembles from around the world.

Concerts are held in the large open-air amphitheatre in the upper, Mediterranean section of the garden and in the smaller indoor music room. You can buy tickets for concerts at Giardini la Mortella on their website.

Other gardens to visit in Ischia

If you’re a garden enthusiast planning to visit Ischia, then there are several other lovely gardens on the island to visit.

The other famous gardens on Ischia are the Giardini Ravino. The Ravino Gardens specialise in cacti and succulents, and they boast one of the largest collections in Europe. If you love cacti then you’ll find a visit to Giardini Ravino absolutely magical. You can also hang out with the resident peacocks!

The Negombo thermal spa is more famous for its relaxing thermal pools, but the landscaping and planting are definitely of interest to garden-lovers.

Would you like to visit Giardini la Mortella? Pin it for later!

Visiting Castello Aragonese on the island of Ischia, Italy

Visiting Haworth and Bronte country, home of the Bronte sisters